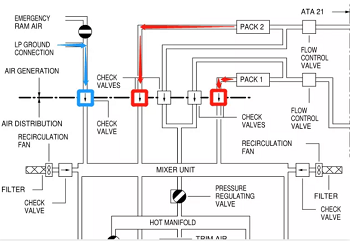 If both ground air and onboard air conditioning are used to feed the system, and their one-way valves (blue and red) are both open normally, the aircraft seems to be getting 2.5x to 3x the fresh air. The flow of the two airflows in the pipeline may undergo complex changes, and the gas near the one-way valve may flow irregularly, causing the flap to not fully open or to vibrate, instead of opening and closing normally. The valve is more prone to fatigue and failure, which in turn affects the upstream and downstream systems; if the one-way valve of the ground air conditioning interface falls off, it will even affect the cabin pressurization.