In the whole process, according to the law of conservation of energy, energy can neither be generated nor destroyed, but can only be converted from one form to another, so the cooling only has the internal energy of high temperature bleed air (expressed as temperature and pressure) and ram air Heat exchange can only be achieved. 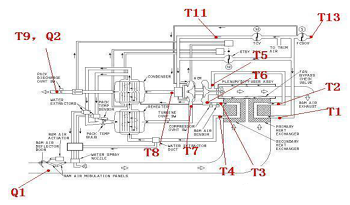 Reasons for the poor cooling effect of pre air conditioning

For the molded heat exchanger, the heat exchange area is fixed, so in order to improve the effect, we can only start from the two aspects of temperature difference and heat conduction effect.

The temperature difference is the temperature difference between the air source bleed air and the ram air. The larger the Δt, the better the effect. Δt = t bleed air - t ram air, and the ram air on the ground is constant at a specific location. Therefore, in order to increase Δt, Raising t bleed air becomes the only key point, the bleed air for the main radiator is constant, so the main radiator Δt is constant, and the bleed air for the secondary radiator t is determined by the compression effect of ACM, and the ACM efficiency is high t lead The higher the gas, the higher the Δt.

1. The ACM itself is dirty or damaged, affecting the blade geometry.

3. Whether the turbine blades are damaged or difficult to rotate, whether the turbine outlet temperature is low enough, the size of the outlet airflow, and the compression efficiency is mainly affected by the following aspects: ACM speed and ACM geometry. The high ACM outlet pressure is caused by the low ACM speed, and the high ACM outlet pressure is caused by the dirty filter of the water separator or the freezing of the lower limit control. Dirty or worn air shafts also affect RPM. Therefore, in order to increase Δt, it is necessary to increase t bleed air, and t bleed air is determined by the ACM compression effect, and the ACM itself is dirty or damaged, and the water separator filter is dirty, or caused by freezing, which affects the ACM compression effect. .

4. The inlet and outlet temperatures of the reheater and condenser can be compared with other aircraft, whether the condensed water has been significantly reduced, etc. Regarding the condenser, the 5157 aircraft managed by our company reacted to the air conditioning condenser crack on August 18, 2011, and then China Southern Airlines issued a non-card for checking the trachoma of the condenser crack. In 2013, China Southern Airlines found that the NG aircraft reacted for 5 times of condensation Cracks and trachoma appear in the device, and the inspection of this part should be strengthened during the regular inspection work.

5. Check that all components are installed correctly and there is no air leakage.

6. It can be checked whether the valve of the component is opened normally and whether the flow control is normal.

7. Whether the heat exchanger is blocked, leaks, and when has it been cleaned.

The solution to the poor cooling effect of pre air conditioning

By analyzing the working principle of the heat exchanger, according to the law of energy conservation, we can judge whether the performance of the air conditioner is declining and whether the cooling effect is poor by measuring and analyzing the performance of the ram air system, the heat exchanger and the ACM, and the outlet temperature of the components.

2. For heat exchangers, the performance of the heat exchanger is mainly judged by measuring the temperature difference between the inlet and the outlet.

4. Judge the performance of the entire module by measuring the temperature at the outlet of the module.