There are two basic types of refrigeration systems used on aircraft: air circulation and evaporative circulation:

The air circulation refrigeration system is based on the reverse Brayton cycle with air as the refrigerant.

The evaporative cycle refrigeration system uses liquid refrigerant that can undergo phase change at room temperature as the working fluid, and is based on the Carroll cycle. 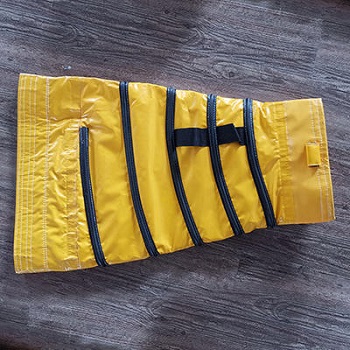 The difference between the two is that the air does not undergo phase change in the air refrigeration cycle, and isothermal heat absorption cannot be achieved; the throttling cooling effect of the air should be very low, and the step-down refrigeration device replaces the throttle valve with an expander.

At present, large aircraft are cooled by an air circulation system. The system consists of two gas pipelines, cold and hot. The gas in the two pipelines is bleed from the compressor of the engine. According to the characteristics of the season and the different needs of the air route, the pilot can Rotate the temperature adjustment knob of the air conditioning panel to the appropriate position. After the temperature controller receives the input command from the pilot, it compares it with the received pipe temperature sensor and the cabin temperature sensor, whether to heat up or cool down, so as to control the cooling that reaches the mixing chamber. The ratio of air and hot air is used to obtain cabin air that meets the needs of human physiology and work.

At present, the mainstream of refrigeration on aircraft is air circulation, which has the following advantages:

1. Environmental protection and no phase change of the refrigerant. Air is a natural working medium, non-toxic and harmless, without any destructive effect on the environment, and can be freely obtained on the spot at any time. In the refrigeration cycle, the air only plays the role of transferring energy, and neither its chemical composition nor its physical phase changes. The energy-saving direct cooling system is adopted.

Even if the air is a refrigerant, it is a carrier refrigerant, and no heat exchanger is required for cooling. The cold air directly enters the environment that needs to be cooled to eliminate the heat load and the system is under positive pressure. When used in aviation, local materials are used, which eliminates the need for a separate compressor to be replaced by a turbojet engine compressor, and also solves the problem of cabin pressurization and ventilation.

2. Wide cooling range and excellent performance at low temperature. The air refrigeration cycle can meet the requirements of minus 140 degrees above zero degrees Celsius, especially when it is below -72 degrees Celsius, its refrigeration performance is better than that of the evaporative cycle system, while modern large aircraft operate from the ground to 10,000 meters high, the temperature changes very much. Therefore, the wide temperature cooling range of the air refrigeration cycle machine just meets its requirements.