The function of the flow control valve (FCV) is to control the amount of air supplied from the air source system to the air conditioning components, which is based on the flow requirements and bleed air pressure through the PACK, and the selection of the PACK button is used to realize the flow control valve (FCV). )control. The percentage of flow is controlled by the air conditioner flow selection knob (5HB), which has three positions: 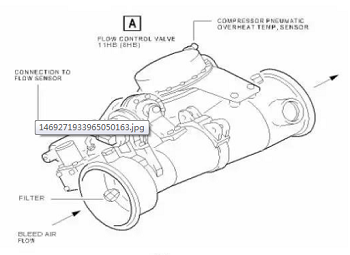 1. In the normal position: set the flow control valve (FCV) to 100% of the full open position of the normal flow;

2. In the low position: set the flow control valve (FCV) at 80% of the normal flow, in order to reduce the fuel consumption when the number of passengers on the flight is small;

3. When in high position: Set the flow control valve (FCV) at 120% of the normal flow, which is used for the abnormal heat of the external environment or to clear the smoke in the engine room.

The valve is energized and closed by a solenoid valve. When the solenoid valve is de-energized, the valve opens under the action of air pressure. The component controller adjusts the component flow by controlling the opening of the stepper motor. It can be seen that the reasons for the closing of the flow valve are electronically controlled closing and pneumatic closing, respectively. If it is caused by the electronic control circuit, the jump switch of the flow control and indication of the component can be pulled out, so that the electromagnetic coil is powered off. At this time, as long as there is air pressure, the flow valve will definitely open. Otherwise, it is caused by pneumatic reasons.

There are two air paths for controlling the pressure of the valve opening cavity: one is the air release path controlled by the stepping motor, and the other is the air release path for the compressor overheating. First, remove the pressure line from the flow valve, confirm that there is air pressure upstream of the valve, and then check whether there is any leakage in the compressor superheat line and whether the superheat sensor is turned on for ventilation. However, when disassembling and assembling the flow control valve, only the conduit joint at one end of the pneumatic overheating sensor is often removed, and when the joint is re-installed, the recovery of the joint is not good, resulting in air leakage, which leads to the failure of the valve to open.

Therefore, it is recommended to remove the entire sensor as well. If it is found during the inspection that the compressor overheating line has leaked or the overheating sensor has been opened for ventilation, although the air output is very small at this time, it is still enough to release the air pressure in the opening chamber of the flow valve, thus causing the valve to fail to open. If there is no air leakage, the fault should be caused by the stepper motor bleed circuit, and only the flow control valve should be replaced at this time.

Before the flight of the B-23X2 aircraft, when the bleed air conditioning button was turned on, it was found that the PACK2 flow control valve (FCV) could not be opened, resulting in the failure of the entire air conditioning component 2 to work. According to the troubleshooting procedure of TSM, the factors that may cause the PACK2 flow control valve to fail to open are: flow control valve (FCV), flow sensor, temperature sensor, compressor pneumatic over-temperature sensor, PACK controller, some relays and lines, etc. . However, it is still impossible to rule out the replacement or combination of the above components.

Continue troubleshooting the next day, according to the troubleshooting steps of the previous day: First, test the FCV, manually flip the FCV valve, and find that the features are accurate and perform well.

Secondly, carefully check the air conditioning pipeline, especially the pipeline connected to the FCV, and there is no obvious air leakage. The relays and controllers have been connected in series, and other air conditioning components are working normally, which proves to be good. In the end, only the sensors are left. Since the flow sensor was replaced with a new one the night before, the focus will be on the pneumatic overtemperature sensor (11HM9).

First, prepare the machine to be connected to each other, and connect the pneumatic over-temperature sensor and pipeline to PACK1 together. When removing the sensor (11HM9) of PACK2, it is found that the nozzle connecting the FCV end is loose, because this pipeline is an air pressure signal pipe; Also, the gas pressure is not high, so even small leaks can cause a false signal to properly open the FCV. Based on the above analysis, connect the pneumatic over-temperature sensor (11HM9) of PACK1 and the pipeline to PACK2, the fault phenomenon is transferred, and the bleed signal pipe is replaced.