You are here: Home / News / Fuel container and its uses

Fuel container and its uses

A wide variety of fuel container types and configurations are used for fuel.Each has its own engineering challenges.A plastic bucket is a sturdy liquid container originally made of pressed steel.It was designed for military use in Germany in the 1930s and holds 20 liters (4.4 Imp gal; 5.3 US gal) of fuel.Three handles allow two people to carry full cans or one person to carry empty cans.Although the structure is usually high-density polyethylene,the basic design is still used today.Portable plastic gasoline containers are commercially available and widely used.These are usually blown polyethylene or other polymers compatible with the specified fuel.The use of a flame arrester has been found to reduce the likelihood of gasoline catching fire or exploding.Certain regions or jurisdictions require child resistant covers or closures.Drums (also known as barrels) are cylindrical containers used to transport fuel.A typical barrel has a nominal capacity of 200 liters (55 US or 44 imperial gallons).Buckets are usually made of steel, but plastic buckets are used for some liquids.Fuel drums need to be properly certified for the transport of dangerous goods:flammable liquids, etc. Steel drums suitable for refurbishment of multiple uses. 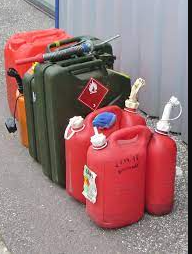 Pouring flammable liquids may generate static electricity.Placing fuel containers on the ground or using grounding straps can help reduce the risk of sparks. In particular,loading a fuel container onto a flatbed truck or vehicle can be dangerous because it is insulated.

The transport of flammable or explosive liquids is strictly regulated.Each country has harmonized shipment design and performance requirements based on the United Nations Recommendations on the Transport of Dangerous Goods Model Regulations.For example,in the United States,the Department of Transportation has jurisdiction and publishes the requirements in Title 49 of the Code of Federal Regulations.Applicable regulations depend on the flash point of the fuel, the quantity transported, the mode of transport, etc.

A fuel tank (also known as a petrol tank or gas tank) is a safe container for flammable liquids.Although any fuel storage tank can be called this,the term is generally applied to the part of an engine system where fuel is stored and propelled (fuel pump) or released (pressurized gas) into the engine.Fuel tanks vary in size and complexity,from small plastic tanks for butane lighters to multi-chamber cryogenic space shuttle external fuel tanks.

Typically, tanks must allow or provide the following:

Plastic (High Density Polyethylene HDPE) as a construction material for fuel tanks,while functionally viable in the short term, can become saturated in the long term as fuels such as diesel and gasoline permeate the HDPE material.Environmental stress cracking is a definite possibility given the inertial and kinetic energy of fuel in plastic tanks transported by vehicles.The flammability of the fuel makes stress cracking a likely cause of catastrophic failure.

The correct design and construction of a fuel tank plays an important role in the safety of the system to which the tank belongs.In most cases a full fuel tank is quite safe as it is filled with a fuel vapor/air mixture well above the flammability limit so it will not burn even if an ignition source is present (which is rare).Dike tanks are used for the safe storage of domestic heating oil and other hazardous substances. Insurance companies generally require bunding, not single-layer storage tanks.Systems such as the BattleJacket and rubber airbags have been developed and deployed to protect (from explosions caused by enemy fire) the fuel tanks of military vehicles in conflict zones.For stationary fuel tanks, an economical way to protect them from hazards such as extreme temperatures and vehicle crashes is to bury them. Buried storage tanks, however, are difficult to monitor for leaks.This has raised concerns about the environmental hazards of underground storage tanks.

The maximum distance an internal combustion engine powered vehicle can travel with a full tank is the product of the tank capacity and its fuel efficiency in miles per gallon.While larger fuel tanks increase maximum range, they also take up more space and (especially when fully loaded) increase overall weight, requiring higher fuel consumption to achieve the same performance.Therefore, tank capacity is a trade-off of design considerations.For most compact cars, the capacity is between 45-65 liters (12-17 US gal); the 15 liter (4 US gal) tank of the original model Tata Nano was excellent. SUVs and trucks tend to have fairly large fuel tanks.A specific fuel system is developed for each new car to optimize the use of available space.Also,for a car model, different fuel system architectures were developed depending on the type of car,fuel type (gasoline or diesel),injector model and region.