You are here: Home / News / Product News / How does aircraft air conditioning work?

How does aircraft air conditioning work?

The air conditioning system, also known as the cockpit environment control system, is to make the cockpit, passenger cabin, equipment cabin and cargo hold of the aircraft have good environmental parameters under different flight conditions and external conditions, so as to ensure the normal working conditions and life of the pilots and passengers. Environment, normal operation of equipment and cargo safety.

Air circulation cooling systems are commonly used in civil aviation transport aircraft today. The high-temperature and high-pressure bleed air is obtained from the air source system, passes through the adjustment device, flows through the heat exchanger for preliminary cooling, and is further expanded and cooled in the cooling turbine to be supplied to the cockpit. The turbine typically drives a fan, or a compressor that feeds the ejector, to draw or eject cooling air from the heat exchanger through which the ejector can draw or eject. 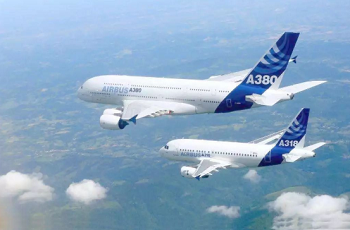 The main components of the air conditioning system include: air heat exchanger, turbo cooler, water separator and so on.

Turbo cooler: As the flight speed of the aircraft increases, the heat dissipation effect of the heat exchanger is significantly reduced, which cannot meet the requirements of cabin temperature regulation, so a turbo cooler with higher efficiency is required. The turbo cooler (ACM) cools the airflow by taking advantage of the fact that the temperature of the air is significantly reduced when the adiabatic expansion of the air does work. The components are divided into three categories: turbo fan type, turbo compressor type and turbo fan compressor type (three-wheel type).

How does aircraft air conditioning work?

Taking the Airbus A380 aircraft as an example, the knob on the temperature control panel has three positions: Cool (18 degrees), Warm (30 degrees), and Auto. The pilot can adjust the cabin temperature within this range.

It can be seen from the above that the performance of the air conditioning system plays a key role in the control of the cabin temperature and the comfort of the aircraft. In addition, it also carries the heavy responsibility of cabin pressurization. Therefore, it is one of the important systems of the aircraft.