You are here: Home / News / Product News / How to deal with aircraft cabin odor?

How to deal with aircraft cabin odor?

Aircraft cabin odor is a very common fault. Once it occurs, it is usually difficult to confirm and eliminate the fault. This is because the aircraft air conditioning system is associated with many other systems (such as engine air supply, APU air supply, etc.).

The main source of cabin odor

(1) Anti-icing fluid remaining after the aircraft is de-iced; 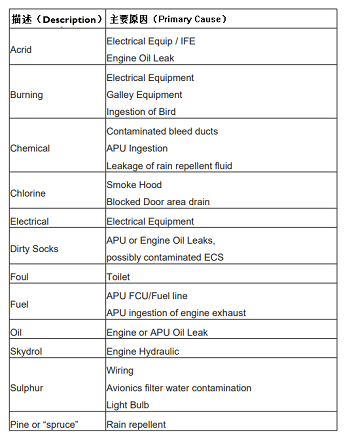 4. Excessive use of dry ice during transportation.

6. The rainproof system in the cockpit leaks.

7. The cargo in the cargo compartment overflows.

8. Items stored in the luggage compartment.

10. The engine oil leaks into the bleed air system.

How to deal with cabin odor?

By considering the potential causes above, it is easy to identify the source of cabin odor reports, such as:

2. After the aircraft has been parked and sealed for a long time, there is a peculiar smell in the cabin, so focus on checking whether there are foreign objects (birds, bird nests, etc.) at each air intake, and whether there is oil leakage in various systems of the aircraft.

3. Sometimes the reason is not obvious. In these cases, it is necessary to use the relevant contents of the Airbus TSM manual for troubleshooting. For the A330 aircraft, the manual is: TSM TASK 05-50-00-810-829-A Identification of the Cause for Cabin Odor, Smoke or Fume❶ .

The record sheet is mainly used to record the time period when the odor occurs, the air supply method of the aircraft at that time, and the specific location of the odor. After completing the record form, it needs to be analyzed in conjunction with the odor analysis form.

Because there are many systems involved in the aircraft cabin, it is difficult to find the source of odor when odor occurs. The source of odor can be judged through the odor record table. The more detailed the record, the more conducive to judging the source of odor. In the analysis of specific odor events, workers also need to combine the recent maintenance work of the aircraft to determine whether there is odor caused by maintenance work (such as: anti-icing work, replacement of bleed air system components, aircraft just unsealed, etc.) .