You are here: Home / News / Product News / How to optimize sealing element friction?

How to optimize sealing element friction?

The friction of seals, especially the phenomenon of hysteretic creep caused by seals, can be intentionally influenced by changing the chemical composition of the material. In the process of changing seal materials, the designer must have a firm grasp on changes in seal wear and crush performance.

The demands placed on seal manufacturers today are good environmental performance while increasing efficiency and system availability. This requirement can be met in a number of ways, one of which is by changing the chemical composition of the seal to improve its friction properties and increase the overall efficiency of the system. Dynamically loaded seals also have the tougher task of maximizing lubricating film life, reducing friction and avoiding leakage.

If the friction of the seal is too high, uneven motion will occur, resulting in severe crawling and stick-slip. In addition, seal manufacturers are now more and more inclined to use elastomer materials and thermoplastic materials suitable for use in low-viscosity media, so when seals are subjected to high pressure and high temperature loads, or after a long period of idleness, it is easy to crawl Phenomenon. For example, when the cylinder is restarted after stopping, it will often fail to operate normally due to the lower driving force. 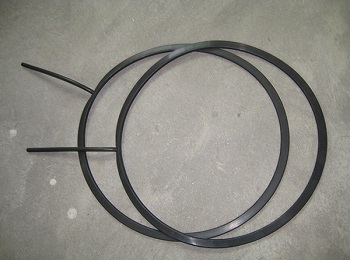 Almost all seals made of elastomeric and thermoplastic materials experience high static friction after rest. There are many reasons for static friction, and the main reason is the material itself. In addition, the geometry of the sealing lip of the seal reacts to changes in the direction of motion, as well as the condition of the lubricant and sliding surfaces, which also have a large influence on the magnitude of static friction.

After many tests, Praedifa Process Technology Research Center obtained a lot of detailed information between the friction properties of common hydraulic and pneumatic seals and the seal material, lubricant material and sliding speed, and fed it back to the seal manufacturer.

In addition, seal manufacturers can learn from this R&D center information on seal geometry and dimensions, as well as physical boundary conditions such as surface material, pressure and temperature. At the same time as the above tests, Praedifa Process Technology Research Center also carried out basic performance tests on friction and wear of different materials with standard geometric shapes and sizes, the most important of which is the determination of the static friction coefficient and sliding friction coefficient of different materials.

This article will explain the whole process using the experiment of thermoplastic TPU polyester material. TPU polyester materials can be divided into polyester-based and polyurethane-based polymer materials according to their macromolecular structure. The test of the static friction coefficient clearly shows the relationship between the static friction coefficient and the hardness of the material, the basic material, the polymerizing agent used and the type of filler material: the friction force changes in direct proportion to the pressure.

In tests on piston rod hydraulic seals, the relationship between the hardness of the seal material and the coefficient of static friction could not be directly obtained. In tests to determine its coefficient of sliding friction, only "softer" materials, such as P5080, have lower stick-slip effects.

But there is a common feature in all the tests carried out, that is, the friction force increases with the increase of pressure. When the friction force increases to the "deformation pressure", ie when the seal is fully seated on the piston rod, it will no longer increase. The size of the deformation pressure is related to the material of the seal. For the piston rod seal made of B3 type P5080 material (standard material in the field of hydraulic technology), it begins to creep when the sliding speed is less than 0.1m/min and the pressure exceeds 5MPa. And as the operating temperature increases, the crawling will be more serious.

Tests have shown that the low temperature U-shaped seal made of TPU P5001 has the best crawling performance. This kind of sealing ring will only show obvious creep when the speed of the piston rod is less than 0.03m/s. If a polymer material with better friction reducing properties is added to the P5080 material with a lower coefficient of friction, it can show less frictional resistance than the standard P5001 and P5008 materials even at very high pressures, and has a tendency to creep also significantly reduced. Seals made from this material have been successfully used in various industrial fields, such as the sealing of interior linings in convertible car roofs. Material optimization is only a small part of the seal development work, which is complemented and supported by structural design optimization, as well as by finite element method analysis.

There is no one-size-fits-all seal material suitable for every working situation. Although the standard materials of seals provided by Parker can meet the requirements of most applications, modern machine tool manufacturing, automobile manufacturing and equipment manufacturing always put forward new and higher technical requirements for seal materials. Based on the increasing knowledge and understanding of the robustness of the seal material, it is possible to adapt the seal material composition to the needs of different operating situations by "modifying" it. With the cooperation of corresponding design and production and processing technology, new sealing materials with unique properties will be successfully developed and put into production soon.