(1) During the entire control process of the air-conditioning system, the controller processes and issues control signals by receiving the signals from each temperature sensor. Once the sensor fails, the control component will receive false information and output an error signal, which will inevitably affect the normal operation of the entire system. This kind of failure phenomenon should be carefully analyzed, focusing on the parameter with the largest deviation value, and checking the components one by one according to the probability of failure. 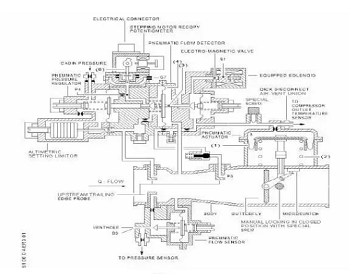 The air conditioning flow selector knob transmits its position signal to the zone temperature controller (ZC), which calculates the required air flow signal and transmits it to the PACK controller to control the flow control valve (FCV) in the corresponding required position.

Cause analysis of the flow control valve (FCV) closing:

The air conditioning unit button is used to control the opening and closing of the flow control valve (FCV), however, the flow control valve (FCV) is automatically closed under the following conditions: valve button switch OFF position, engine fire button release, engine start, ditching The button is turned on, the compressor is overheated, and the bleed air pressure is too low.

Open and cause insufficient air supply pressure when starting the engine. When the relay fails, it is possible to remain in engine-on mode, which keeps the flow control valve closed.

2. Failure caused by air leakage or blockage in the air circuit in the system

Air leakage from air conditioning components usually occurs at the seals of the joints connecting the pipes and heat exchangers, ACMs, condensers, and reheaters. In addition, the internal cold and hot grids of the condenser are prone to cracks and perforations, resulting in air leakage and mixing of cold and heat, which reduces the heat exchange effect of the condenser itself and directly affects the outlet temperature of the components. Often the primary and main heat exchangers, reheaters and condensers are prone to blockages. Due to the narrow cross-section of the airflow passage of the heat exchanger components, the accumulation of impurities in the air increases, resulting in blockage of the air path.

In addition, after the adjustment function of the stepper motor fails, the component valve can only be maintained at a low flow position, which will also cause the system flow to be low. If the internal leak occurs between the cold and hot circuits of the condenser, the flow of this type of faulty component is relatively normal. In addition, in the event of a temperature adjustment failure, if the flow rate and outlet temperature of the components and the hot-mixed air system are all working normally, but the temperature adjustment is still out of control, you should consider checking whether there is air leakage or blockage in the outlet pipeline of the component and the air supply pipeline in the passenger cabin.

Reason analysis: ACM: Because the ACM air bearing area is quite easy to wear, the supporting force of the ACM air bearing is insufficient or uneven, and the wear of the ACM transmission shaft and the base is aggravated, resulting in a decrease in the ACM rotation speed, which cannot be matched with the larger bleed air flow. Matching, the accumulation of energy is formed, which causes the temperature of the compressor outlet to rise, and also makes the cooling effect of the turbine abnormal, resulting in a higher outlet temperature of the PACK.

During the maintenance work of the A320 aircraft air conditioning system, the fault phenomena and causes encountered are various, and sometimes it is only reflected by the crew without any ECAM and CFDS information. This requires that maintenance personnel must be proficient in the principles of air conditioning and related systems, comprehensively consider various possible factors according to the specific phenomenon of the fault, make good use of the method of logical reasoning, constantly summarize experience and learn from the practical experience of others, and conduct troubleshooting in combination with the manual.