In many old documentaries, we can often see ground crews pulling the propeller of the plane with their bare hands to start its piston engine. But at a time when jet engines are widely used, this approach is obviously unrealistic. Jet engine technology has made great progress in the new century. The diameter of the largest turbofan engine, GE9X, has even exceeded an astonishing 3.4 meters. Obviously, the intake air volume and starting power required for its startup are also difficult to provide by manpower. Therefore, People began to explore how to quickly start a huge jet engine. Specialized ground handling equipment was tried in early explorations. But this is easily limited by ground conditions and cannot meet the needs of fast startup, so the APU came into being.

Structure and function of APU

The full name of APU is Auxiliary Power Unit. Its core part is a turbine engine, which is generally installed in the tail cone part of the rear end of the aircraft. The air inlet is generally located on the fuselage near the vertical tail, and the exhaust port is generally located at the end of the tail cone. However, because the tail part of the transport aircraft is equipped with a cargo door, the space in the tail part is not enough to accommodate the APU, so many transport aircraft, such as the former Soviet Union's Il-76, my country's Yun-20, and the United States' C-17, their The APU is located in the main landing gear bay. 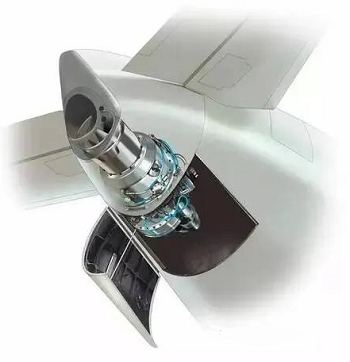 The meaning of APU

APU is a small but indispensable power unit on an aircraft, and it plays a very important role.

For commercial airliners, the emergence of APU can be said to solve the contradiction between ground cabin comfort and cost. When the plane is on the ground, the pilot does not have to start the main engine that consumes a lot of fuel early, and only the power provided by the APU can maintain the operation of the cabin air conditioner, lighting and other electrical equipment, which greatly reduces noise and cost. Great cabin experience. At the same time, the self-starting function of the engine brought by the APU also brings better airworthiness to the aircraft, enabling it to operate in small airports with less complete ground handling facilities.

For military aircraft, APU is also an important part of improving the combat effectiveness of aircraft. Tactical transport aircraft and helicopters equipped with APU can more efficiently deploy operations at field airfields on the front lines.

At the same time, APU is also an important guarantee for flight safety. APU can provide a very critical energy guarantee for the aircraft in emergency situations and provide strong support for flight safety. For example, US Airways Flight 1549, known as the "Miracle on the Hudson River", stopped both engines after hitting a bird. The APU was activated at a critical moment to make the flight table and instruments of the aircraft operate normally, and the assistant captain carried out the final forced landing.

The auxiliary power system provides the power needed by the aircraft's electronic brain to prevent the pilot from performing certain potentially dangerous maneuvers. In addition, Central American Airlines Flight 110 also experienced the danger of double-engine shutdown. The APU was activated in an emergency to maintain the necessary energy for aircraft control, and finally the aircraft landed safely on a river bank.