Aircraft ground air conditioning (hereinafter referred to as PCA) is an air conditioning unit that provides fresh air suitable for temperature and humidity environment and physiological needs for passengers and crew members parked on the boarding bridge at the airport, which provides a comfortable environment during ground maintenance. The unit has the characteristics of rapid cooling, fresh air, and large air volume. Replacing the aircraft APU system when the aircraft is ready to fly or maintain on the ground can greatly reduce the cost and reduce the pollution to the airport environment. It has the characteristics of energy saving and environmental protection. After the official opening of the PCA of Baiyun Airport Terminal 2, it can avoid the pollution caused by the consumption of aviation kerosene by the aircraft APU, reduce carbon dioxide emissions every year, and also reduce the operating time and frequency of aircraft engines, thereby saving aircraft operating costs. Extend the service life of the aircraft's own air conditioning system and engine.

After the aircraft air conditioner is started, the host refrigeration unit sends the cold air into the aircraft cabin through the air supply hose, and connects the air duct inlet at the bottom of the aircraft in the form of a snap. 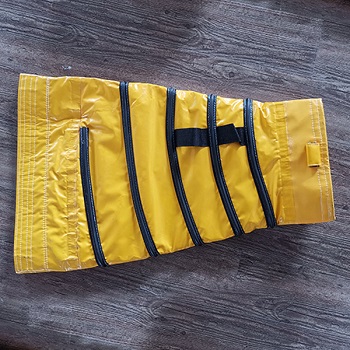 The necessity of decoupling the duct head of air hoses

2. The air duct head is equipped with a DS18B20 temperature sensor, which can collect the temperature on the aircraft;

3. Through the 485 interface, the background can collect the current status information of the air duct head and feed it back to the management system to achieve real-time monitoring.

4. The principle of the decoupling device for the duct head:

(1) Detect the function of the sender:

a.Temperature data detection: The DS18B20 temperature sensor is used. When the air conditioner is working, the temperature data of the air duct head is detected in real time and sent back to the receiving end.

b. Falling off state detection: The mercury tilt switch is used. When the air duct head falls off, the mercury is triggered under the condition of gravitational acceleration, and a falling off state is detected. After the mercury switch is turned on, the state signal is sent to the receiving end to control the action of the relay.

d. Power supply requirements: The battery capacity can be used for at least 2 years.

e. Requirements for fixed-point transmission: It should be considered that the drop-off signal of the current transmitting end on site will not affect the working state of adjacent equipment. The sender can be set to match with the receiver, and the matching effect is that one receiver can correspond to one or two senders.

f. The communication distance between the sender and the receiver (closed space) is more than 50 meters.

The temperature sensor, mercury switch, battery and signal transmitter are integrated into the air duct head.

Instructions for air duct hose use

A sensor is installed on the air duct joint of the modified aircraft ground air conditioning to detect the state of the end of the air duct. The processor processes and converts the signal transmitted from the sensor and uploads it to the terminal actuator to realize the state detection of the air duct joint of the aircraft ground air conditioning, instead of The traditional manual inspection method in the existing technology meets the current needs of efficient utilization of resources. It has the function of monitoring the terminal status and connection status of the aircraft air-conditioning air duct, and can be wirelessly transmitted back to the aircraft air-conditioning host in real time, which is applied to the real-time performance of aircraft air-conditioning Feedback adjustment and duct joint trip monitoring. The air transport industry is playing an increasingly important role in the modern logistics industry. Ensuring the effectiveness of its operation and maintenance work to the greatest extent will be directly related to the safety and efficiency of this industry. This transformation will ensure the maximum extent of the aircraft The safety of the ground air conditioning operation avoids the waste of human resources, time resources and money resources, and provides convenience for the maintenance of airport order and passenger service.