You are here: Home / News / Product News / What's the function of the holes in the plane?

What's the function of the holes in the plane?

The role of APU of pre air conditioning

The hole in the tail of the plane is the auxiliary power unit, or APU for short. Inside this hole is a small turbine engine (some of which are converted from turboprop engines), and this hole is used for intake and exhaust. 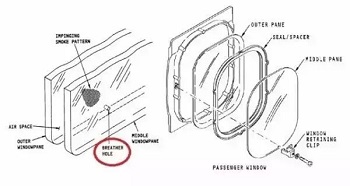 In fact, the design of the APU is mainly for two aspects. One is to prevent the aircraft from relying on the airport power supply, and it is equipped with an auxiliary power unit. Some APUs only have a power supply function, such as the B787 series. Most APUs provide not only electricity but also compressed air to ensure lighting and air conditioning in the passenger cabin and cockpit. When the aircraft takes off, all the engine power is used for ground acceleration and climb to improve take-off performance. Only a small number of models will provide some thrust, but it is negligible. The second aspect is also the most important, because the APU is integral to the entire flight. If the aircraft stops (turns off) in the air and the APU is a main device used to start, that is to say, the APU is always ready for the aircraft.

Usually, the auxiliary power unit is turned off when the aircraft climbs to a certain altitude (below 5000 meters). However, when the main engine is stopped in the air during flight, the APU can be started in time at a height below a certain height (usually 10,000 meters) to provide power for the engine to restart. So this inconspicuous hole seems to be optional, but in fact he is indeed an indispensable part of flying.

The role of porthole breathing holes

The hole in an airplane window is called a porthole vent. It has two main functions:

1. Adjust the pressure between the inner and outer window panes. Simply put, if something happens to the plane, it can adapt to changes to ensure that the oxygen in the cabin can breathe normally.

The three layers of the plane's windows are made of different materials. In fact, the one with holes that you see is the middle layer, and the outermost layer can be touched by everyone. The hole is in the middle. In the event of an accident, the adjustment ability of the small hole reaches the limit, and the outermost layer of the glass is also broken, which can also maintain the airtightness of the cabin.

2. Prevent condensation on the windows. Because during the flight, the altitude of the aircraft reaches about 10,000 feet (5,000 meters), and the temperature outside the window is often lower than minus 50 degrees. The generation of water vapor can be avoided. Also acts as a defogger in the car.