Strength is essential when it comes to piping for preconditioned air(positive pressure) applications.The same goes for smart engineering.Reinforced Insulated Duct is intelligently engineered inside and out - outperforming any other brand.All three layers of Reinforced Insulated Ductwork...outer, insulation and inner are made from the highest quality materials to provide unrivaled durability no matter how challenging the ramp requirements.Additionally, welded construction and flame retardancy combine with best-in-class UV stability and mold inhibitors for further performance and durability. 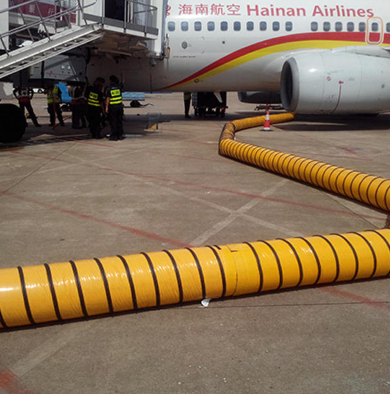 The middle layer is composed of stitched polyester insulation similar to the high-performance materials found in cold-weather clothing and camping products.

Narrow-body aircraft like the Airbus A320 can carry more than 100 passengers.A wide-body aircraft like the Boeing 777 can carry more than 300 passengers. A jumbo jet (Boeing 747) or Airbus A380 can carry over 500 passengers.Also, the seating arrangement on the plane is not very spacious. If the economy class seats on an airliner were replicated at home, an average-sized bedroom could easily accommodate 20-30 people.Lock so many people in a room with no air conditioning and leave the rest to your imagination.In addition to the above, there are a lot of electrical equipment in operation on the plane, especially in the galley where meals are stored and prepared onboard. Additionally, sufficient temperatures need to be maintained in the cockpit to ensure the smooth operation of electronics.All of the above factors make it necessary to have air conditioning inside the aircraft at all times, whether the aircraft engines are running or not.

When is pre-conditioning required?

1. In addition to the above, airline personnel also perform different cleaning and maintenance tasks inside the aircraft to make the aircraft ready for the next flight.

4. Ask the ground crew to connect the air conditioner.

5. Ask the ground crew to connect to the Air Start Unit (ASU).

The use of auxiliary power units (APUs) is discouraged due to noise and emissions - both factors considered negative in the heavily regulated aviation industry.Air starting units (ASUs) are primarily used for engine starting and are therefore also not suitable for air conditioning.That's where Preconditioning Air Conditioning (PCA) units come in. The concept is to connect external air conditioning into the aircraft's air distribution network so that when the aircraft's own air conditioning system is turned off, there is a comfortable environment in the cabin. Keep.

What's up with the name "preconditioned air"?