Inflatable expansion seal is a ring-shaped or straight-shaped sealing product composed of a strip-shaped hollow rubber airbag and an inflatable exhuast nozzle. Its working principle is When the airbag is inflated through the inflator, the cross-sectional shape of the airbag will expand and deform, thus realizing effective sealing. When the exhaust valve is opened to discharge the air inside the airbag, the cross section of the airbag shrinks, that is, it is out of the sealed state.

Inflatable sealing (or pneumatic sealing) technology is the simplest, safest and effective sealing technology. It is a patented technology product of Shaanxi Yuhua Yonghe Aerospace Technology Co., Ltd. (YHYH). It is especially suitable for use in the following situations:

>Laboratory gates and observation windows in a closed and silent environment;

>The gap that needs to be sealed is large and inconsistent.

The air nozzle is an important part of inflatable seal, The compressed air is sent into the cavity of the seal through the air nozzle to expand the seal;

The air nozzle can be made of rubber material or metal material such as brass;

The air nozzle made of rubber is actually a section of hose drawn from a certain part of the seal (see Figure 2A), and the air source guide tube can be directly inserted into the hose;

Both metal air nozzles and rubber air nozzles are connected to the seal as a whole through a special process, and cannot be disassembled or replaced;

Generally, Inflation and exhaust nozzle of the inflatable seals have two structures, namely, intubation type and threaded connection type, The final structure depends on the interface of the gas supply pipeline, If a hose is used for air supply, the intubation type is the most convenient, if a metal pipe is used for air supply, the threaded connection method should be used. 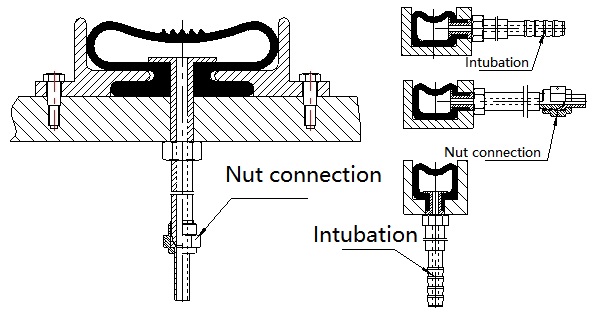 Shaanxi Yuhua Yonghe Aerospace Technology Co., Ltd. can design and process the size of the gas nozzle according to actual needs to meet your requirements to the greatest extent.

Main performance and testing test of hydraulic and pneumatic seals

Leakage inspection: Before leaving the factory, check the leakage of the seals one by one. In a free state, fill the inflatable seal with 1.2 times the working pressure of compressed air, and immerse the seal in the sink to observe whether there is any leakage.

Visual inspection: Before leaving the factory, in the natural state and 1.2 times the working pressure of the inflatable expansion state of the sealing parts for leakage inspection, that is, visual observation of the outer surface of the sealing parts whether there are cracks, damage, spongy and other appearance defects. Observe whether there is any abnormal phenomenon such as crack, bulge and thin neck in the appearance of the seal under the inflatable expansion state.

Withstand voltage test: The seal sample should not rupture or leak and other abnormal phenomena under the working pressure of 1.5 to 2.0 times.

Sealing test: If necessary, the test fixture can be designed and processed according to the actual installation state, and the seal sample is loaded into the test fixture, and the test proves whether the seal meets the sealing requirements under the specified gap. Shaanxi Yuhua Yonghe Hangyu Technology Co., Ltd. has a Chinese patent for sealing test.

Working fatigue test: Load the seal sample into the test fixture, set the inflation test pressure to the working pressure of the seal, and fill the seal sample with compressed air to fully expand the seal, keep it for a certain period of time and then exhaust, and then inflate and exhaust again. That is, cyclically inflate-maintain-exhaust-inflate, until the specified number of inflation-exhaust cycles is reached, or the seal is fatigued and damaged and the sealing function is lost.