For ram air, the air in the atmosphere enters the ram intake port from the ram air intake valve, and then flows through the primary air conditioning heat exchanger and the secondary air conditioning heat exchanger in turn. After cooling the hot air in the assembly, it enters the plenum chamber. Finally, it is discharged out of the machine through the diffuser.

The air path of the ram air

SRADA changes the air flow into the ram intake port by changing the position of the front and rear adjustment plates, and activates the guide valve through the guide valve link to realize the opening and closing of the intake valve. When the aircraft is on the ground, the ram air intake valve is fully opened to prevent foreign objects such as ice cubes, stones and other foreign objects from entering the air intake and damaging the air conditioning components; when flying in the air, the ram air intake valve is fully closed, and the air conditioner/lead on the cockpit P5 panel There is a light indicating RAM DOOR FULL OPEN (ram intake valve fully open) on the air panel. Note that even if the ram intake valve is fully closed when the flap is not fully closed, the light is still on. At this time, the grille of the exhaust port is not fully closed. Turn the light until the flaps are fully retracted. A self-test on the PZTC (component zone temperature controller) can test whether there is a fault in the ram air system. If there is a fault, it will display the front SRADA, the rear SRAD or the ram air temperature sensor fault. 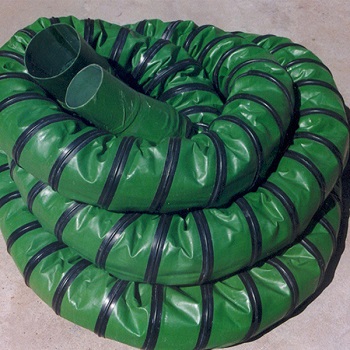 ACM consists of compressor, turbine and impeller fan. The fan is located at the diffuser end of the secondary heat exchanger. When the aircraft is on the ground, due to the low relative speed between the air and the aircraft, a good stamping effect cannot be produced. Negative pressure is generated, and the outside air is sucked into the heat exchanger; when the aircraft is flying at high speed in the air, the fan does not work, the ram air enters the ram air inlet smoothly, and at the same time, the fan bypass one-way valve in the diffuser is opened, and the airflow It flows into the diffuser through the valve and is discharged out of the machine.

The air path of the bleed gas in the module

The bleed air source of the component is APU, engine and ground air source vehicle, and the gas enters the component through the flow control and shut-off valve to provide hot air for the air conditioner. The flow control and shut-off valve is an electro-pneumatic switch that controls the pressure and flow of gas entering the air conditioning module. The position of the module switch and the state of the aircraft-related system determine the opening of the valve.

The bleed air passes through the primary heat exchanger, ACM compressor, and secondary heat exchanger in turn, and then enters the reheater. The function of the exchanger is to cool the air entering for the first time to reduce the temperature of the gas entering the condenser. When the air comes out of the condenser and enters the reheater again, it has the effect of heating.

After the air enters the condenser, the temperature is further reduced, and the temperature reaches the dew point, so that the water becomes liquid, and the water is separated under the action of the high-pressure water separator to obtain a relatively dry gas. There are two water separators on both sides of the condenser. There are rotating blades at the inlet of the water separator, so that the air entering the water separator rotates. Under the action of centrifugal force, the water is separated and thrown to the inner cylinder wall, and further collected by the water collector. It is discharged to the water collection main pipe through the pipe, and finally discharged to the ram air intake to cool the ram air. If the drain pipe is blocked, it can flow directly to the air conditioning cabin through the bypass valve. The high-pressure air that has been removed from the water flows through the reheater again, and then enters the turbine, which drives the turbine to rotate at high speed.

In order to prevent the condenser from freezing and to control the outlet temperature of the assembly, the gas from the turbine enters the high pressure water separator assembly mixing header, which mixes the ACM turbine outlet cold gas with TCV and the gas from BTCV, TCV (temperature control valve) and BTCV (Backup temperature control valve) Controls hot gas flow from the assembly flow control and shut-off valve. TCV is an electronically controlled electric valve, and BTCV is an electronically controlled pneumatic valve. When the TCV fails, the BTCV enters the standby mode to control the outlet temperature of the components, and also plays a role in preventing the condenser from freezing. When the gas from the ACM flows through the condenser, it is heated to a certain extent, and the temperature continues to rise. Finally, it flows into the mixing header or the cockpit through the one-way valve, so that the air-conditioning components can produce cold air of suitable temperature.